How it all started...

After a long career in a service-based role, John Herrick was ready for a change of pace. With an engineering background and an entrepreneurial mindset, John set out to find an industry where he could inject some innovation, and he found his inspiration in the most unexpected place.

While travelling around Europe, playing with the idea of selling rubbish bins, John settled down in Germany in anticipation of the beer fest. He visited a mate’s place for a drink and was taken out into a “Veenter Garden”, as his friend described it in his strong Bavarian accent. It was a small conservatory built on the side of the house, to protect his modest veggie garden during the cold winter months. As his friend described the practicality and usefulness of it, John noticed the walls were made not of glass, but a polycarbonate material he hadn’t seen before, and the seed of innovation was planted in his head.

As John continued travelling, he kept noticing greenhouses, and how they were all the same. The greenhouse industry stopped evolving as the need for homegrown food dropped away with supermarkets and fast food. His rubbish bin idea was quickly forgotten as his mind started turning with the possibilities of how he could create modular kitset greenhouses for backyard growers, and how they could serve multiple purposes, like growing food and being a cool space to relax in.

John returned to New Zealand, where his idea quickly grew into a plan to reinvent the greenhouse. He knew polycarbonate was the innovation the industry needed, combined with better and more practical design.

After 12 months of research, design, and testing, the first Winter Gardenz greenhouse rolled off the production line. Since then, Winter Gardenz has grown to include larger commercial structures and architectural projects with the help of John’s brother Peter. With the now 13 strong team, Winter Gardenz continues to be at the leading edge of growing structures and systems, expanding into several different ranges including Quarantine, Research, and Automation, and continues to focus on innovation and quality in their evolving product range. 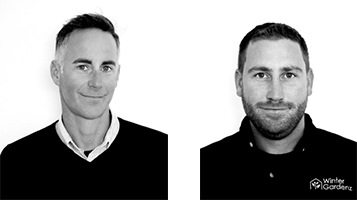 There are no products listed under this category.

Talk to usEmail US